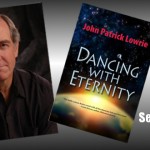 Dancing With Eternity (winner of the inaugural ForeWord Firsts Debut Fiction Award) was released on September 1, 2011

In the 40th Century, Almost No One Dies

What would happen if Odysseus met Captain Ahab in the 40th Century? Only Captain Ahab is a beautiful woman named Steel who owns her own starship and Odysseus is an unemployed actor named Mohandas who’s stuck on the backside of a backwater moon because he won’t pay his taxes. And everybody — well, almost everybody — lives forever.

Steel, Mo and the crew of the starship Lightdancer embark on an incredible voyage of adventure, self-discovery, and revelation … And they get to go to a lot of really cool planets, too.